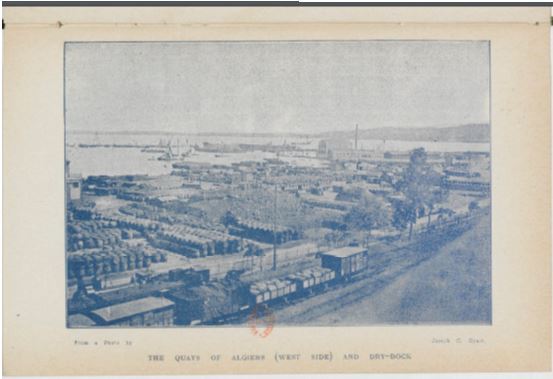 The Quays on Algiers Bay

At the beginning of the second section of the Illustrated Guide, Hyam discusses the Quays, which are seaports on the Bay of Algiers. He describes a buzzing, energetic scene with merchants selling wares, cargo ships coming in and going out, railway cars chuffing in the distance, and several languages being spoken at once. He uses short vignettes of possible individuals one might encounter to better depict the place. For example, in characterizing one unnamed family, he says “here is the gitano, wearing a short coat and very tight trousers, his shiny black hair stick to his temples. He carries in a voluminous red sash around his body the utensils of his trade. He is followed by his wife and a brood of ragged urchins”. Beyond the quays, fisherman of all stripes are visible making their living.  Notably, this place is not made out to be characteristically Algerian, or even French. This is a true confluence of native peoples, tourists, merchants from far away lands, men, women, and children all on a broader mission.

Still, extraction of Algerian resources and colony maintenance were the primary commercial goals, and this is underlaid in much of the text. He describes some of the exports, including “Cardiff coals, zinc ore, barley and wheat”. Then, as Hyam moves from the Quays to discuss the nearby boulevards, he describes the many buildings that make up this eleven-acre area of the promenade, including banks, the post office, the chamber of commerce, two hotels, Cook’s tour agency, and the Algerian Advertiser offices. Each of these things is representative of the bureaucracy and organization that maintain and reproduce colonial presence. Surprisingly, Hyam tells us that the boulevards “which are justly considered to be the finest piece of engineering work that Algiers possesses” were built by an English contracting company after a French one failed to complete the work. This resulted in a land concession from France to England, the terms of which were that England would own the land for 99 years, until 1964. The author, who is English, then points out that the agreement was not a financial success, since the boulevards are not producing in revenue anything close to their building cost, the implication being that England had essentially helped the French build up their colony for very little return. In this way, the guidebook is depicting the commercial activities in Algiers to be simultaneously a meeting place for people of all backgrounds working toward the successful enterprise of French Algeria but also as belying French weaknesses by comparison to England. The information in this section isn’t written as a practical guide for tourists, but rather as a narrative of a place that is supposed to leave the impression of a bustling bureaucratic state but simultaneously reinforce English superiority in colonial enterprise.

← Climate and Health
Economy and Commerce