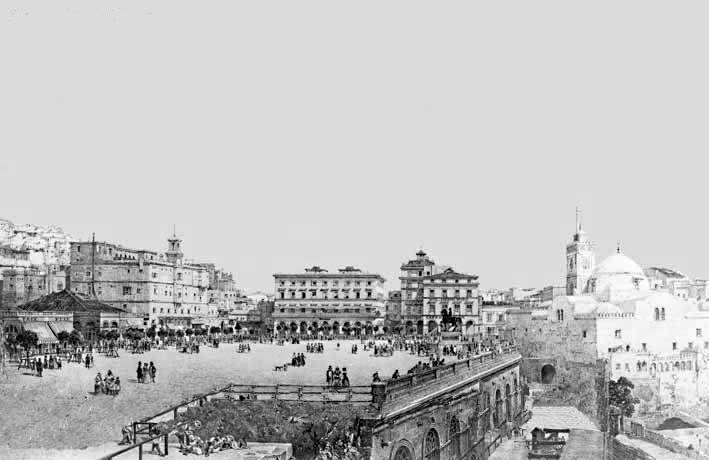 Throughout his guidebook, Hyam describes the population of Algeria as an attraction on the same level as the country's natural and historic sights. He specifically names certain sites, such as the Place du Gouvernement in Algiers, as prime spots for observing "the conglomeration of flaneurs and loungers, attired in their respective national costumes, [which] give an intensely interesting and picturesque aspect." While Hyam frequently references the Algerian population as a nameless, faceless crowd, he also dedicates a full, five page section to "Native Inhabitants." Interestingly, he includes the Spanish, Italian, and Maltese populations in this category, reflecting their ambiguous position in colonial society. They were consideredsomewhat “better” than indigenous Algerians - Hyam does not offer outwardly racist comments about them - but not truly French. Consequently, Hyam views them as objects of curiosity for the (Western) European gaze, and notes they often occupy menial positions in society.

Hyam's sweeping generalizations continue in his passage on "Native Inhabitants." His characterizations of various ethnicities often reflect the political interests and racist beliefs of the colonial government. For instance, he contrasts the "true" native Algerians, the Kabyles, with the Arabs, casting the former in a positive light. He claims the Kabyle "loves hard work, and is at all times a thrifty man, whereas the Arab rejoices in idleness.”  This reflects the French government's policy of framing itself as an ally of Kabyles, suggesting they should join forces against the Arabs. Yet Hyam clearly does not consider the Kabyles as true equal of Europeans, lamenting "it is only a pity he is so unclean: he seems to revel in dirt and filth, and lives more like a pig than a human being."

In another instance of tailoring his guidebook to France's political interests, Hyam describes the "atrocities" committed by the Ottoman Empire against Algeria's Jewish population. He claims that since the Décret Crémieux (decree which granted Algerian Jews French citizenship), they are "the happiest people of Algeria...they even enjoy more civil rights than the French Algerians." Conveniently, his narrative completely ignores antisemitism in Europe, as exemplified by the Dreyfus Affair. He also engages in clearly antisemitic tropes, including the infamous "the Jews here are conspicuous by their great capacity for money-getting."

Hyam's "well-intentioned" racism reflects his inability to consider non-Europeans as real equals; at best, he thinks of them as somewhat inferior allies. He occasionally grants special attention to individuals, such as the Emir Abd-el-Kadr, who led the resistance against French colonization and thereby became a figure of myth, and his own professor of Arabic. This roughly summarizes the two categories of people he deems worthy of individual attention - they are either figures of legend or allies of France's colonial interests.

Lastly, Hyam's descriptions of people, beyond their period-typical racism, point to a larger trend - the tendency for European travelers to consider themselves amateur ethnographers, thereby granting them a fake authority over non-White populations. Barbara Kirshenblatt-Gimblett notes how this tendency persists in modern tourism, particularly in the performance of "authentic" cultural festivals, raising the issue of "the illusion of cultural transparency in the face of undeciphered complexity and the image of a society always on holiday."