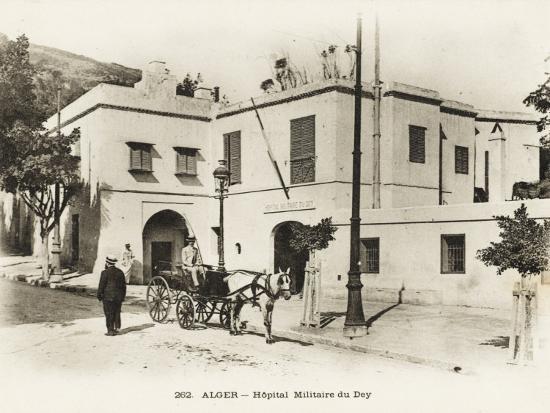 Hòpital Civil (circa 1840) was a public hospital that admitted all folks regardless of their identity for a small charge while Hòpital du Dey (circa 1833) was solely a military hospital. Hyam narrates the former as “picturesque” and sweepingly large with twenty buildings bridged together by scenic walks and gardens and personal touches like flowers stowed in patient rooms. If an individual could not afford medical treatment, they were able to undergo free treatment at a minuscule building beside it.

The aesthetic and capacious Hòpital Civil aided French colonization as much as Hyam’s descriptions on it because they sought to reassure European tourists that a place filled with Algerians was civilized. Hyam wanted the everyday tourists to know they could travel to Algiers and be safe if anything unfortunate happened. The French placed their ideas of European society and civilization onto the Algerians through this hospital. Also, Algerians were likely to use the separate, smaller hospital since it was free. The French established themselves as a presence that could bring costless healthcare to Algerians. This subtle yet manipulative motive was a method to make Algerians dependent and forcibly complicit to French occupation. Hòpital Civil enabled the French to maintain their dominance, authority, and surveillance over Algerians.

Contrarily, Hyam describes Hòpital du Dey as superior and “a model establishment of its kind, one rarely sees anything similar, managed and conducted in a better and more practical manner, either in France or England”. It was more spacious, picturesque and contemporary than Hòpital Civil with “the latest hygienic appliances”, tropical plants, and French oil paintings. Hyam chronicles that “this hospital leaves nothing to be desired” because the hospital carried everything wished.

It can be inferred that Hòpital du Dey was more vital to the French because it helped maintain their control and power over the Algerians by caring for a strong military force. The French also brought their ideas of civilization to Algiers through their emphasis on technology and Western medicines of healing over Algerian, traditional practices. This hospital was a tourist infrastructure that allowed the French to indirectly assimilate Algerians into European civilization.

Hyam’s guidebook furthered the agenda of the French empire. Through his words and descriptions on the two hospitals, he influenced European tourists to come to Algeria with an empire mindset, one characterized by their belief in superiority and civilization.