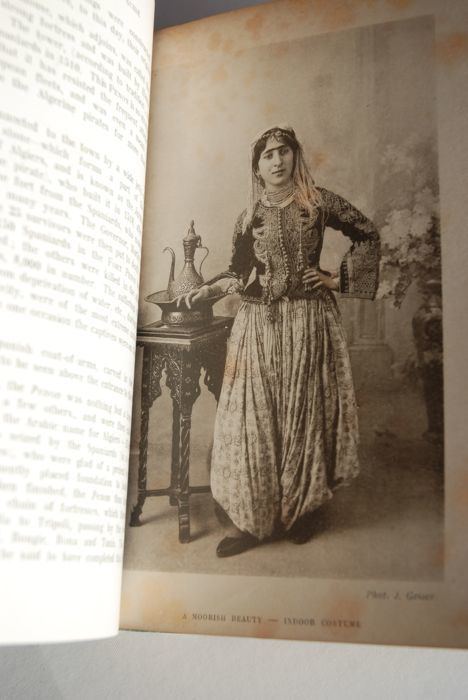 An example illustration from the Illustrated Guide.

The Illustrated Guide to Algiers was published in 1913 and written by Joeseph Hyam. This guidebook was intended to provide practical guidance to the area as well as a multidue of visual aids in the form of illustrations. The main text of this guide is organized into five main sections, entitled Algiers-General Description, The Town of Algiers, The Environs of Algiers, The Interior, and Practical Information. These sections vary widely in the depth of what they cover as well as the practical specificity of their advice. The first section describes how to get to Algiers, then varied general descriptions about the town, population, climate, native inhabitants and languages. The next portion is devoted to Arab women and marriages, and then the chapter moves on to old houses, zoology, sport, hunting, and native industries. These disparate topics are included in the first section to cover a kind of cultural introduction for the tourist before moving on to more practical information. The second section is devoted to the town and spends a large portion of the beginning explaining the finer points of the Mohammedan (Muslim) religion, then continues to discuss more pragmatic advice on churches, cemeteries, public gardens, theaters, clubs, and hospitals. The third section describes various possible walks and drives at length, with specific attention given to what is worth looking at for the tourist and what is not. For example, in describing how a tourist might reach the Ravin de la Femme Sauvage, the author provides very specific detail, saying

“Starting from town, the road is taken as follows: Boulevards de la Republique and Carnot. Rue de Constantine, Agha, Rue Sadi-Carnot, to the Champ de Manoeuvres, the road then passes behind this large space to the Village of Belcourt, a thickly populated district. There is nothing attractive along this road until the Champ de Manoeuvres is reached.”

Here, the author is giving every detail of a possible route in addition to mentioning specifically what is worthwhile to look at. Part four discusses carriage tours from various locations, similarly pointing out what is worthwhile for the tourist to see and do, and what is not. This section also covers the geography and climate of the interior regions of Algeria, away from the city. The last section addresses practical information such as telegraphs, railway times, official fares, and where to go shopping. Finally, the guide is illustrated, so throughout the sections, there are photographs interspersed in addition to and alongside the text. Many of the images depict native peoples, in groups or alone. Other images show significant architecture or natural landscapes. These images are provided by the author to create a full and complete picture of Algiers for the tourist. One can already see that the author has a great deal of power in determining what the tourist might see and what they might not, which contributes to creating a very specific narrative of colonial Algiers. SG