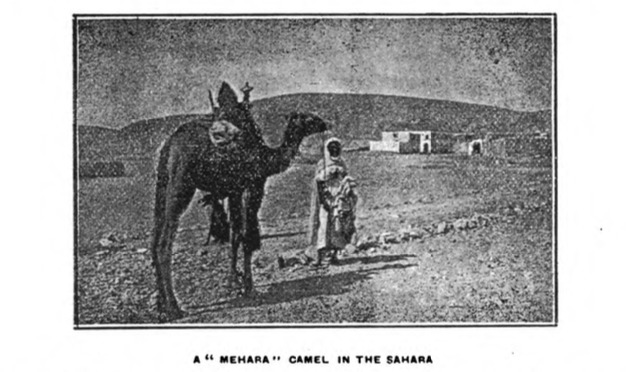 Hyam paints Algiers as a picturesque city, crowded with diverse Algerians, sundry tourists, exotic animals, and magnificent scenery spread across walks, gardens and towns. Above all, the city was a heaven with the “spotless blue of the sky, the deeper blue of the Mediterranean, the vivid green of the vegetation and the dazzling silvery snow-capped mountains in the distance”. However, Hyam’s description of its beauty furthered tourists to imagine Algeria and its geography as theirs to consume and experience because they simply could. The French empire granted European tourists the ability to physically see how they benefited from colonization and Hyam describes it as a sight for sore eyes.

The towns and walks of Algiers illustrate the typical picturesque geography. Hyam describes the Quays, a town, as laden with the blue sea, white sailboats, a shining sun, and fashionable tourists. The walks of Mustapha Superieur were “picturesque” with the outlook of the Bay of Algiers and the lovely and luscious floral gardens. Shady trees and enchanting paths filled the towns and walks, and they were charming. Yet, Hyam repeatedly renders Algerian homes as the most picturesque sight for the intrigued tourist by describing them as “very curious Oriental villa[s]”. To Hyam, the beauty of Algerian geography was synonymous with how different Algerians were, and the “curious” tourist could glimpse into Algerian life and see what made Algerians “Oriental”.

Also, Hyam expresses that the climate was a novel and enticing pull for tourists because the natural beauty and “pure air” of the landscape nurtured a curing home for the sick. The Algerian sunshine could heal unhealthy tourists with its mere beams because “the sun shines for nothing”. Through inspiring tourists to explore the natural beauty of Algeria, Hyam reduces the city’s geography down to its value and consumption for Europeans and not Algerians or nature itself. This narration feeds into the idea that European culture is superior to Algeria’s nature.

Comparably, Hyam also portrays Algeria’s geography as a space ramped with wild and exotic animals like a zoo: panthers, leopards, ostriches, red deer, Algerian monkeys, Arab horses, and camels. Hyam reduces Algerians to animals. He expresses that Arab horses became beautiful when they lost their dark and furry coat. Hyam also writes that light-colored thoroughbred mares were routinely desired over darker shade mares: “the thoroughbred mare is usually bay; that is the color most in favor with the Bedouins. The hazel shade comes next; black is not at all liked. White is much sought after, but is very rare”. Additionally, Hyam believes the Touareg natives were similar to their hard to tame camels as the camels alone “will be able to face the outrageous and dreaded inhabitants of the Touareg country”. The geography is a vehicle for Hyam to illustrate that within European structure, there were the colonist (civilized, tamed) and the colonized (uncivilized, wild).