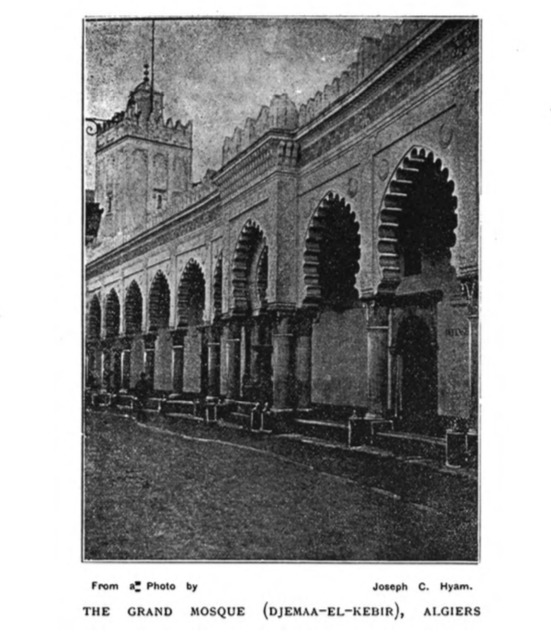 In his guidebook, Hyam reports that most Algerian Muslims are Sunnites. Hyam distinguishes them from Shiites and points out that Sunnites declare themselves to be the traditional and rightful Islamic party. Within the Sunnites, there are four sects: Hanefites, Malikites, Shafiites, and Hanbalites. Hyam claims Algerian Muslims are mainly Hanefites and Malikites and they practice “purification, prayer, fasting, pilgrimage and charity”. He highlights that followers pray five times a day, and he spends several pages explaining their eight praying positions, with illustrations performed by a Muslim.

Hyam writes that Muslims live in “their Oriental city, [with] their primitive customs and their strange costumes, all of which are highly interesting and curious”. By describing Muslims as “interesting” and “curious”, Hyam displays them as sites to see in the French empire. Their religious practices are unlike those of his mainly Christian readers. Hyam relies on the reader’s curiosity of Muslim practices to mask his surveillance on Muslims. He finds that it is “an impressive spectacle to see them praying, in hundreds together, in the mosques, or in the open air — a scene to which I have often been an eye-witness”. Hyam’s curiosity of the “Other” religion allows his readers to participate in the colonial experience. This experience is a non-innocent, racist adventure marked by European tourists believing in their superiority.

Hyam’s curiosity is violent. This is seen from the racist exchange by him, the readers and the empire towards Muslims. Hyam’s violent and racist curiosity is also demonstrated by him using visual evidence or photographs of praying practices to illustrate Muslims as the Other in the empire. By including what he finds curious, it seems that Hyam believes it is important for his readers to have an experience with those he deems the Other (Muslims). He is helping inform his readers of their own position within the empire which is as tourists and therefore upholders of the French empire. Hyam’s message is apart of a larger European dialogue during this era that believed Muslims were inferior and the Other in the world.

Additionally, Hyam embraces the French empire and its belief in (Christian) religious superiority when he voices “the Mohammedans revere Christ as a prophet sent from God. They say, that before the coming of Mohammed, Christ was the greatest of all prophets”. Hyam does not allow Muslim practices to stand separate from Christianity. He tries to separate the French empire from Muslims, while at the same time, he reassures his readers that Muslims are a part of the empire and tourists should go see them.

Hyam also remarks, “the tombs of great Arab saints … are very curious on account of the presence of all theses loose objects; and the idea of placing such things as offerings in a tomb, and hanging them about the place in so peculiar a manner, is regarded with curious interest by visitors, particularly of English nationality”. Hyam describes Muslim practices as “curious” and of “curious interest” to tourists because they are not like Christian practices. He is telling his readers to go to Algeria with his same curiosity. His curiosity is a type of surveillance that portrays him, his readers, and the empire as simply observing Muslim habits and customs. Yet Hyam’s curiosity is actually justifying French empire and colonialism in Algeria by him disguising his intentions of seeing “Orientals” and their religious practices as a curiosity.