Who Was Thomas Cook?

Thomas Cook (1808-1892) was born in England and gained notoriety for helping to pioneer a “new form of travel,” one which arguably formed the basis for tourism as it is understood in the modern day (Hunter, 30). In the early to mid 19th century, a desire for leisure time developed among the middle and working classes. Cook, a “cabinet-maker and Baptist preacher,” that he could use a democratization of travel to promote morality, specifically, temperance; he was additionally “committed to the idea that travel could widen a person's horizons, increase knowledge, and break down barriers of class, nationality, and gender” (30). The first large-scale Cook tour was to the London Crystal Paris Exhibition in 1851, but the Cook organization quickly expanded throughout Europe. John Mason, Cook’s son, joined the enterprise to help manage growing demand. In 1869, Cook launched his “Grand Tour of Egypt and Palestine/Syria,” and Cook hoped to “bring the age of mass, inexpensive travel to yet another region of the world”(31-32).

Cook’s link to military and imperialist forces, exemplified by the entrance of the British army to Egypt in the 1880s, cannot be discounted in the reading of his guidebooks (39). Cook profited tremendously from “an official commission from the British government to convey a British expeditionary force from Alexandria to the Sudanese border” along the Nile, which he subsequently channeled into his tourism enterprise (39). It has been said that “By the turn of the century, there were two empires on the Nile - Britain's military occupation, and Cook's Egyptian travel,” and Cook tourism helped increase Egyptian economic dependence on Britain as well as strengthening political imperialist control on the part of Europe (44). Similar dynamics emerged in Algerian and Tunisia, where Cook tours were also tremendously profitable.

The Thomas Cook and Sons Guidebooks, including the edition explored in greater detail on this website, must be analyzed with a critical understanding of Cook’s position in history. Cook and Sons greatly enhanced the ability of tourists to move through Northern Africa as well as Europe, providing routes for a wide range of destinations, and offering practical advice about climate, travel, and accommodations.  Cook’s Practical Guide to Algeria and Tunisia showcases in some ways the practicality of the Cook enterprise from the perspective of a European tourist of his time. However, for the modern reader, the descriptions of history, local culture, and sites of interest cannot be separated from Cook’s position as a European and his role in benefiting from if not actively promoting imperialist and colonialist expansion. 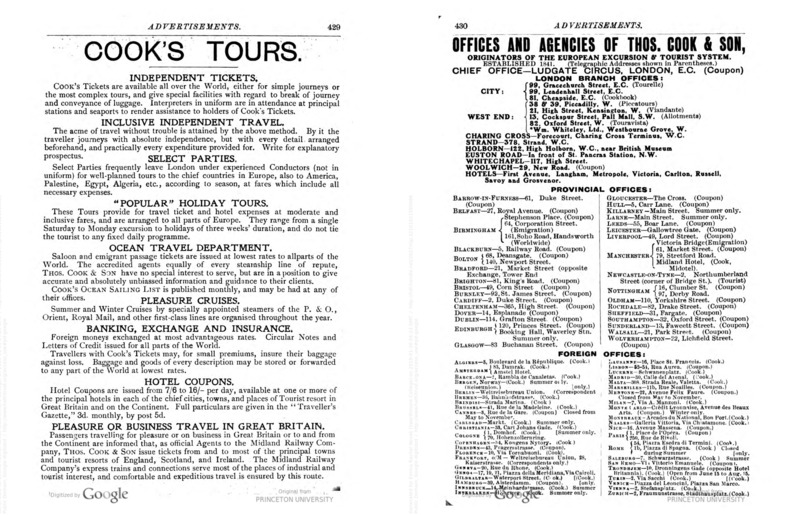 Overview →
Who was Thomas Cook?