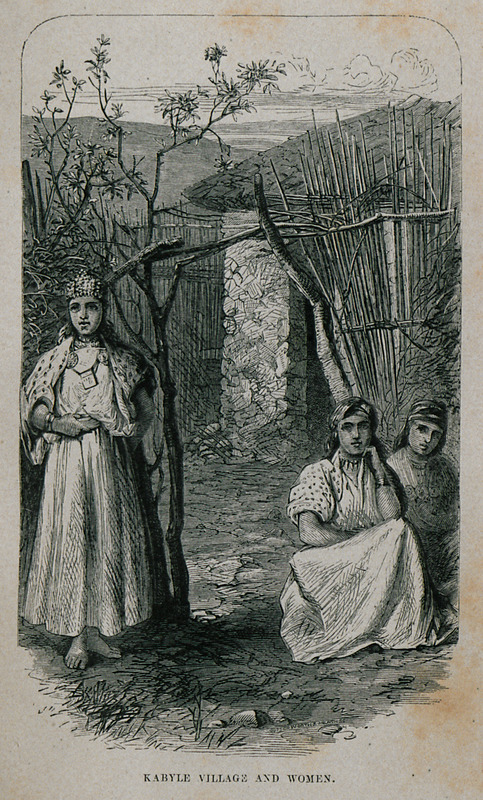 While Hyam dedicates several subsections to the “characters” of various ethnic groups, particularly the native Arab and Kabyle populations, he rarely describes actual encounters with them. The complete absence of a phrasebook or glossary in the guidebook suggests that, while the “natives” are one of the primary attractions for tourists, they are to be watched from afar and not actually approached. In fact, learning Arabic is specifically discouraged: Hyam notes that “the Arabic tongue, however nicely spoken, is gutteral [sic] in the extreme and by no means pleasing to the ear. I doubt whether many people would learn Arabic for mere choice sake.” Hence, he suggests, the traveler is better off not bothering to learn Arabic, and therefore not interacting with native populations at all. What may seem like chauvinism on Hyam’s part points to a larger trend in colonial travel; in his analysis of air travel in Africa, Gordon Pirie notes that “Passengers gazed at near-naked natives...Part of the air tourist experience was watching the expression of colonial social organization.” Pirie further explains how airlines fulfilled the same role as Hyam, putting native populations on show while constantly moderating how close tourists could get.

This open refusal of direct contact may see contradictory considering that much of the tours proposed by Hyam involve visiting native villages and markets, which he describes as curious attractions for the European tourist. However, these spaces are always framed so as to seem either devoid of any human presence or full of nameless, faceless crowds. In one instance, describing the village of Boud-Zaréa, Hyam notes that “the groups of women and children that one sees afford an interesting sight for European travellers.” By lumping all the women and children into a single group, he denies the villagers any identity or autonomy, and makes it difficult for readers to imagine them as individuals capable of actual exchanges. In several other instances, he describes in some detail how the houses of each village are built, without mentioning the inhabitants’ reactions to European foreigners peering at their homes and daily lives.

The few, actual exchanges which Hyam does describe tend to fall into two categories: on one hand, he quotes Arab scholars and thinkers to confirm his own descriptions of Algeria and its inhabitants. In one instance, he quotes an English writer’s encounter with an Arab Marabout who claims that “there are two things which an Arab cannot resist - wine and women.” This supposedly wise man’s analysis of Arab men does nothing but reiterate Hyam’s description of them as irresponsible fanatics, and the marabout himself is portrayed in a semi-comic light, speaking in halting French with broken syntax.

On the other hand, Hyam depicts most Algerians with whom the tourists interact as thieves. As practical advice, he warns to “Have no confidence whatever in the loafing Arab Porters...Beware of pick-pockets (principally Arabs),” reducing all actual encounters with Arabs to scams or robberies. In the closest he comes to describing a real exchange between tourists and natives, he claims that in the village of Tazmalt, “sleeping accommodation...can always be obtained in a native hut. A dinner of couscous can also be had.” This remark raises several questions - how are these accommodations obtained? Are tourists required to actually interact with the villagers? Yet Hyam provides no more information, reducing the inhabitants of Tazmalt to silent - and perhaps unwilling - hosts.