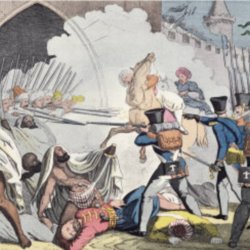 The Guide du Voyageur claims to be destined to "the scholar, the artist, the worldly man, and the colonialist," likely hoping to appeal to as many audiences as possible. Yet when one considers the content of the guidebook, it appears to target settlers more than any other group.

The book opens on a detailed schedule of ships going to Algeria from the port of Marseille, with advice on how to leave from various cities around France. It includes extensive tips for first time traverlers to Africa, including how to pack, avoid sea sickness, and safely transition into drinking and eating in Algeria. This suggests that most of the guidebook's users are not experienced travellers, despite that the title suggests. It also appeals to the commercial instincts of potential settlers, hoping to attract business to Algeria by detailing at great length the weights, measures, and currencies in use in Algeria, and their change rates. This section on practical advice ends on a 30-page long glossary of "most usual Arabic words", which covers a great variety of scenarios, applicable to daily life moreso than to casual travel.

The guidebook then switches into more "travel-specific" information, including an overview of Algeria's geography, history, and various statistics (with particular emphasis on the administration and army). Much of these informations attempt to justify colonization. At one point, for no real purpose, the authors describe in gruesome detail the  torture and execution methods used by the Turkish regime against non-Muslims. These gory "fun facts" make the French colonizer seem benevolent, and justifies Europeans' belief in their racial superiority.

At this point, the guidebook veers into a long description of Algiers, which receives much more emphasis than any other city in Algeria. He then starts describing various circuits and routes among Algeria, almost all of which originate from Algiers. Perhaps due to its identity as capital of the colonial administration, Algiers is the center point of all travel in the guidebook.