References to Antiquity Throughout the Guide 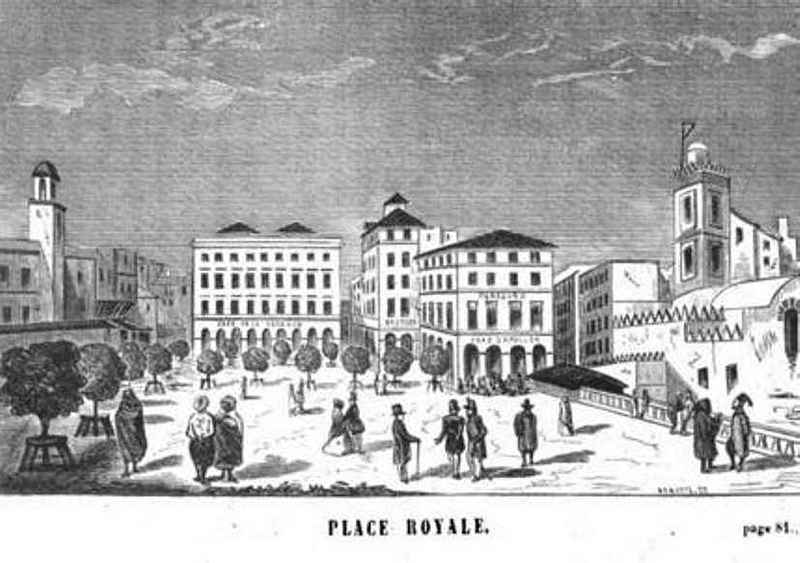 In a route that takes the reader through Algiers, the Guide du Voyageur en Algerie describes the Place Royale, a large space bordered by new French hotels. Here, “Maltese, Germans, French, Negroes, Arabs, Kabyles, Moors, and Syrians” can be seen walking to and fro, as “a veritable Babel.” The author’s description of the plaza paints a pretty picture of a cosmopolitan, French world with an expansive economy. It also helps the author to justify French occupation.

The phrase “a veritable Babel”  refers to a Biblical origin story from Genesis. In the story, citizens of the city of Babel aimed to b uild a tower that could reach Heaven, and God punished them by “confusing their tongues” so that they could not communicate to build the tower. Thus, the comparison between the plaza and Babel is to say that they are many people who cannot understand each other because of the different languages one could hear them speak. Biblical references such as these remind the readers of one French justification for imperial expansion: the spread of Christianity.

The author does not just use Biblical references in this section; he almost exclusively references Roman and Biblical stories throughout the Guide, rather than sources such as Algerian cultural histories or myths, or Islamic stories. These references allow Quetin to compare the contemporary French occupation with the past Roman occupation of the region. This comparison shines a positive light on France as the more “enlightened” and religious empire, while also emphasizing that they are or could be as powerful as the Romans. References to antiquity also portray these spaces as merely symbolic, having escaped any improvement that would have brought them into the modern world. This presents them as passively accepting the ‘benefits’ of European occupation and development, as Mary Louise Pratt argues in “Imperial Eyes.” In a similar vein, exclusively describing locations in reference to antiquity also confirms a biased, Orientalist view that the African colonies of European empires were stuck in time. The empire profited directly from this angle by selling tickets to tourists who were looking for an “escape” from modern life.

← Art, Literature, and Tourism at the Casbah
The Shrine as Spectacle: Culture through a European's eyes →
References to Antiquity Throughout the Guide