The Shrine as Spectacle: Culture through a European's eyes 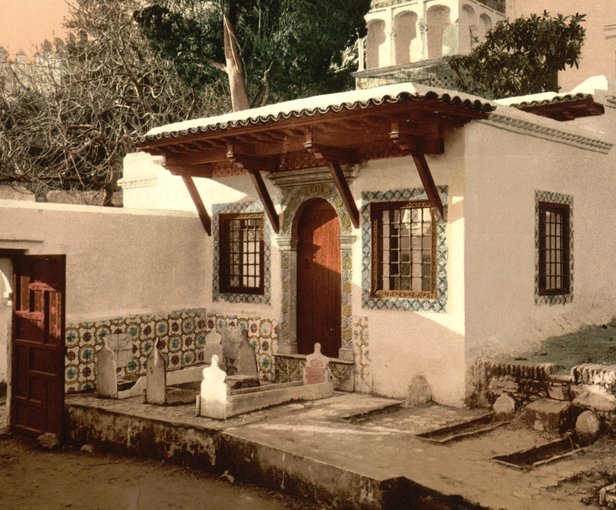 ‘Two steps away” from a well-kept French garden, in a cemetery within the Casbah in Algiers, the tourist finds the tomb of Sidi-Mehamed-ben-Abderahman (alternately, Sidi Abdul-Rahman Athaalibi), according to the Guide du Voyageur en Algerie.

For the author of the guide, Quetin, an important religious pilgrimage to this tomb becomes a spectacle for tourists: “a crowd of Moorish men of all ranks and ages invades the cemetery, and despite the presence of past generations who surround them, the girls play children’s games with each other. This show seems like something from a fairytale to a European.”

Sidi Abdul-Rahman Athaalibi was an Islamic scholar who has multiple shrines, including in Casablanca, Morocco, and is also considered a marabout or popular saint in the Islamic tradition. He died in 1479 C.E. However, none of this background found its way into the guidebook. That Quetin leaves out any of the history of Sidi Abdul-Raman’s voyages or studies as well as his cultural significance to Muslims is significant, as he effectively ridicules Algerian culture and the Islamic religion as a whole. Because he writes only of the children’s games, his description paints their cultural traditions as less serious than those of Europeans. In addition, he criticizes the pilgrims by saying they are not serious enough about their ancestors to prevent their children from playing games in cemeteries. Thus, there is more room for Europeans to claim Christian traditions are superior, and that their occupation could have a positive influence on Algeria.

He also racially stereotypes the Moors by using the word ‘invade’ to describe their entrance into the cemetery, which has military connotations.

← References to Antiquity Throughout the Guide
Individuals →
The Shrine as Spectacle: Culture through a European's eyes