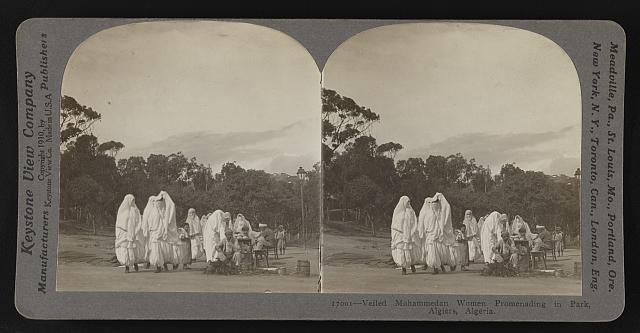 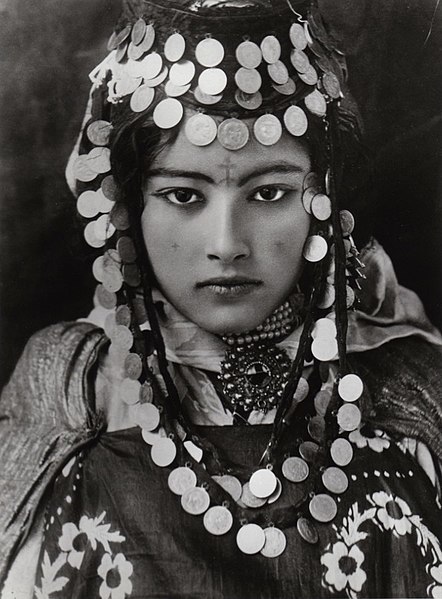 The Guide du Voyageur resorts to a variety of arguments to justify the colonization of Algeria, from claiming that the Ottoman Empire oppressed the population (thus stating that French occupation is inherently better than Ottoman occupation) to suggesting that the Algerians were letting their fertile soils and lands go to waste in the absence of proper (read: European) exploitation. One of their most recurring arguments, however, is that of the treatment of women, whom they describe as mistreated by their families, society, and religion.

The authors frequently compare the treatment of Arab women to that of animals, lamenting that “the poor creatures carry on their backs jars full of water of heaps of firewood, in a word working as beasts of burden.” The implication is often that women do all the work instead of the men, whose portrayal as lazy and unhelpful justifies colonization; in one instance, they specifically claim that “[women] are but slaves, doing all the most exhausting and unpleasant tasks, while the men sleep or smoke.” The Guidefurther casts aspersions at the virility of Arab men, claiming that “an Arab must passionately love those he has married if he prefers them to his horse or his goats.” This half-joke raises the specter of “unspeakable” sexual practices (in this case bestiality) which Western authors used to depict “Orientals” as bestial sexual deviants. It also serves as an implicit contrast to the French attitude towards women, which the authors portray as galant and progressive. In one of the more self-satisfied passages, they note that “It must be strange for these Arabs and Bedouins to see our courtesy and care for women; and the latter must sadly consider their lives when they compare their abject state to the respect with which we treat them.”

The question of the “superior” French treatment raises further questions. Although the authors describe the French as superior in their treatment of women, they fail to provide concrete examples of gender equality in their society, hiding behind terms such as “courtesy” and “respect”. In one instance, they note that “women never participate in these meetings [on public affairs],” neglecting to mention that women were also banned from the public political sphere in France. Furthermore, while the writers express concern for the dignity and condition of Algerian women, they tend to describe them in the same animal or objectifying terms they claim to denounce. On multiple occasions they refer to their supposed fertility, claiming “Moorish women become fertile at 11 years old and cease being so at age 30.” This interest in fertility reduces women to a role as childbearers, and their own interest as quasi-naturalist. They further advise that tourists “not rub up too close against that [Arab women] for they almost all have scabies.” The term “that” reduces the women to the status of sexual objects, if undesirable to the “civilized” European. Lastly, their description of the ill treatment of women takes up about one page, and is framed by over three pages which describe in detail the appearance and garb of various “types” of Arab women, suggesting that their interest lies more in “unveiling” and contemplating them freely than in aiding their emancipation.

← Religion
Art, Literature, and Tourism at the Casbah →
Local culture