Said's Orientalism and Racist Ideology in Depictions of Local Culture 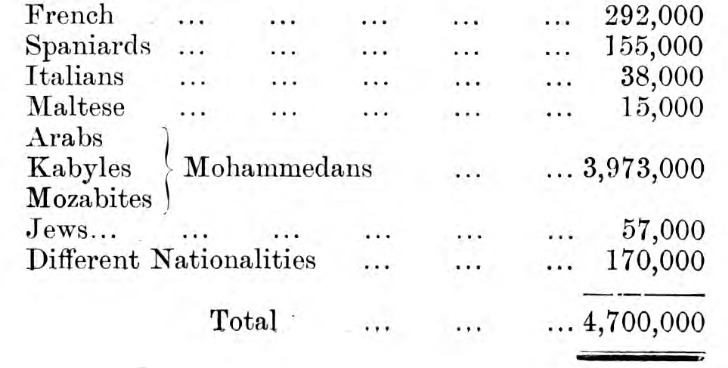 Population data taken from a 1901 census. 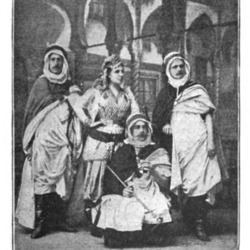 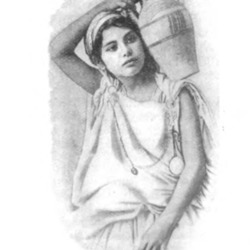 (Note: Cook's captions to photos are included without alteration to demonstrate the depictions of Algerian and Tunisian culture in the Guide, however, it is absolutely essential to read them critically in the modern day).

Descriptions of local culture in Tunisia and Algeria are part of a complex imperialist framework constructed by Cook and European travelers of his time.  The population distribution of Algiers is listed as primarily “native Mohammedans:” Arabs, Kabyles, or Mozabites. Arab culture occupies a particular position in Cook’s Guide as a source of simultaneous European fascination and disdain. In the descriptions of Arab dress, architecture, and custom, the reader can clearly see the ramifications of Orientalism, as theorized by Edward Said.

Said describes Orientalism as “British and French cultural enterprise” and calls it “a created body theory and practice” (Said 4). For Cook’s Europe, the “Orient” existed first and foremost as an idea; formed by scholars, it could, therefore, be both understood an manipulated by them. Cook’s section on native dress provides an example. He calls Arab clothing “majestic,” and uses Arab language where appropriate to detail garments such as “serroul” (trousers)  and “rlila” (silken jackets) (Cook 20). Despite this apparent show of interest in Arab culture, it is clear that Cook has a rigid conception of how Arab people should dress and behave. Said says that “any deviation from what were considered the norms of Oriental behavior was believed to be unnatural,” and Cook’s writing is reflective of this perspective (Cook 39). For instance, Cook mourns the loss of “originality” among Arab populations in towns who shifted away from the “baggy trousers...huge white turbans” with which Europeans traditionally associated them. In an equally telling section, Cook says that, while Jewish people in Algeria have largely taken to European styles and they are “easily recognized… wearing native garments... [which have] lost much of their former character” (Cook 20).  Once again, the Guide prepares tourists to identify and single out the cultural “other” while at the same time, demeaning it.

The false premise of European authority on authentic local culture persists throughout the Guide. At one point, Cook points tourists to Halfaouine, a place where, he claims, “a vivid impression of the every-day… Arab life” can be observed. At the same time, he criticizes the “[lack of] real Oriental character of the souks or bazaars ” (Cook 342). The assumption that Europeans can identify this “real” character is borne out of Orientalism. By holding the belief that European tourists intrinsically understand Algerian and Tunisian culture, even when not exhibited before them as expected, shifts power in their favor. As Mary Louise Pratt says, the tourists enforces the power of empire through anti-conquest, by assuming in all interactions with local people that he already possesses the upper hand (Pratt 9).

European cultural identity was reaffirmed through comparison to colonial culture and that which was foreign (Pratt 4). Traditional Algerian and Tunisian cultural practices, such as weekend markets, are painted as exotic in Cook’s Guide (Cook 178). Markets were a space in which native people might be encountered in their daily lives, an example of Pratt’s “contact zone” between the colonizer and the colonized (Pratt 8).  Cook says, “the variety of the food stuffs offered for sale is most interesting, but not more so than the open-air exhibition” (Cook 239). Moreover, Cook includes locations of “ordinary market[s],” presumably, those suited to tourists’ actual purchasing needs (Cook 121).

All aspects of local culture and behavior as described in Cook’s Guide contribute to the Orientalist constructions of Algeria and Tunisia. By describing local dress and behavior, Cook assumes a position of knowledge and authority. European tourists believed themselves, as owners of the Guide, to be armed with information about “true” Arab culture, and they enter the colonial space prepared to make comparisons between that which they imagined and that which they observed. Through this process, local culture was transformed into a way of reiterating European superiority in spaces of empire.