We first notice that the “Churches” section leads the foray into Murray's discussion of Algeria’s religious sites, as it comes before the section on “Mosques.” In addition, the former is nearly double in length due to the sheer amount of churches being described. This choice of layout, and fixation on the white, Christian narrative of Algeria’s culture, establishes to the reader that Christianity is seemingly significant to the majority of Algeria’s population, which today is 99% practicing Sunni Muslims. Following this is an ornate description of the Holy Trinity Church of England erected in 1870. Lambert Playfair details the patronage of the church, how it thrives off of voluntary donations, and depicts majestic, even divine stained-glass windows that add color to the white marble that adorns the church. Several more similarly detailed descriptions of other Christian churches follow, and the end of the section is bracketed by the listing of several more churches. As we continue into this next section on mosques, however, we see a shift in language and appreciation for the architecture that is uncomfortably noticeable. (According to the Diocese of Egypt with North Africa and the Horn of Africa, after the French colonial government reclaimed land on which the original Holy Trinity Church of England was built, it was relocated in 1908 to this current location.) (JEB) 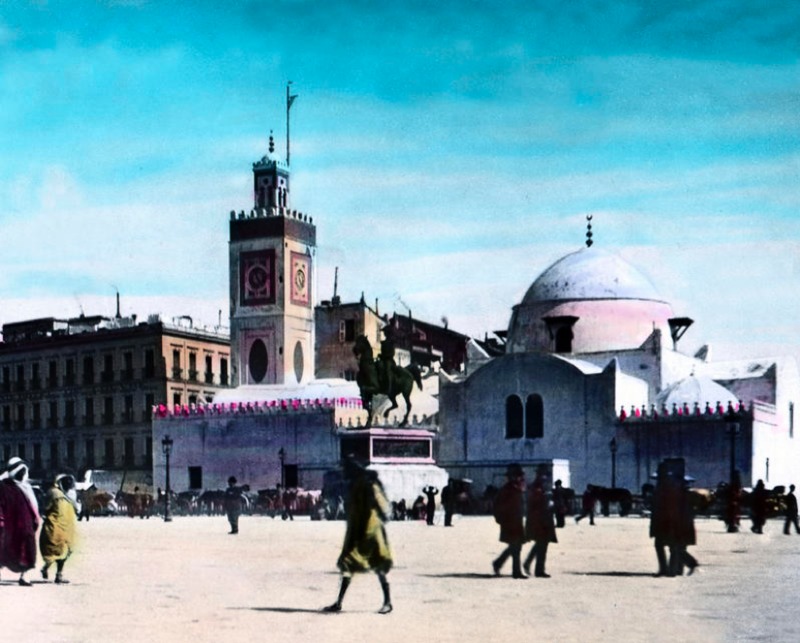 A Multitude of Mosques in Algeria

“There are many more of these Koubbas in Algiers, but they resemble each other so much that a notice of one will suffice” (100). Lambert Playfair underscores his lack of any interest in mosques and Koubbas and assumes that his audience too will choose to gloss over the section that is arguably most representative of Algeria. According to our author, there were “apparently” over one hundred mosques at one point, but he clarifies that many of these so-called mosques are actually Koubbas, sites for prayer, while the rest are merely tombs for Arab saints. This comment seems contradictory given the lengthy section on Churches that precedes this one. It becomes more overt here that a strong Christian narrative gives colonists a purpose to cling to in their conquests. Murray’s handbook chooses to detail only four mosques, seemingly under the claim that there are not many to explore. Jamaa el-Kebir is the first of these, whose walls are depicted as simple and white with Moorish arches and columns. There is the mihrab that points in the direction of Mecca, and in this particular mosque, worshippers are of the Maleki rite. In the mosque descriptions that follow, the effort to describe the details of the sites increasingly falters. These particular quotes reflect the boredom with which the author imparts in his writing: “[Jamaa Safir and Jamaa Ramdan] are so like those already described that it is unnecessary to do more than mention their names” (100).

(The Grand Mosque, or Jamaa el-Kebir, is located in the same spot in which it was constructed in 1097.)
(JEB)

Perhaps the most glaring religious examination found with Murray's is that which describes religious rituals. Though brief but phantasmal in fashion, Lambert Playfair laundry lists the “maniacal” and “frantic” traditions of the Aissaoui, complete with sensationalist descriptions of the acts such as eating live scorpions or chewing broken glass. The way in which this is described dampens these rituals from a position of sanctity to a mere circus show for the traveler. Before ending the discussion on religion as a whole, the author makes sure to note that many of these acts may seem “curious,” and are unforgivably “disgusting.” The sentiments here are less conflicting, and instead more steadfast in an imperialist, racist register, harkening back to an era in which Christianity permeated both mind and matter in a sinister way. Lambert Playfair, though jarred by the experience, most likely chose to include this anecdote because it was “authentic” and taboo to the average traveler. While unclear how manufactured this ritual may have been, seeking the authentic has certainly been a tourist trend that refuses to die, even now, as we see the same trends in tourists looking for religious retreats, tattoos, or otherwise taboo and adventurous experiences. (JEB)