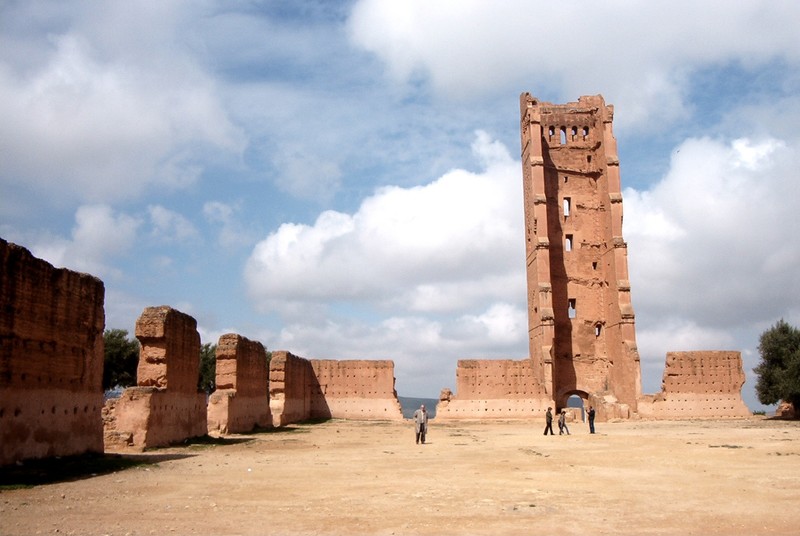 The minaret of the Mansourah mosque in Tlemcen.

Though the author of Murray’s Guide spends much of the guide criticizing the history, culture, commerce, and agriculture of native Algerians and Tunisians, he makes an exception for the ruins of the Mansourah Mosque in Tlemcen (a province outside of Mascara): “Aesthetically, the tower can hardly be too highly praised. The proportions are perfect, the decoration rich and original, or at least unlike anything else in the neighbourhood.” He describes the blue and green tiles, now faded, that distinguish the minaret (glossary definition: a tower of a mosque) that stands among the ruins of a mosque built in 1303 by Sultan bou Yakoub Yousuf bin Abd-cl-Huk.

Yet the guidebook engages in an Orientalist discourse that uses the East within this praise of Algerian architecture. The author uses the mosque as a foil -- a facet of orientalism Edward Said describes -- for the “superior” features of European culture. He refrains from admitting that an entirely Arab architectural structure, one completely different from a European style, is beautiful, by writing that the minaret “resembles a European church-tower in position.” Thus, it is still European culture that has a monopoly on beauty. Furthermore, his statement that the history of Mansourah “resembles something out of Arabian Nights” reveals his conflation of literary tropes with real aspects of Algerian culture, which precludes a genuine engagement with the actual, contemporary culture -- another trademark of an Orientalist viewpoint.

Culture in the City of Tunis

“Nothing is more attractive to the stranger than the Native Bazaars, which, amidst all the manifold changes and ameliorations which have taken place around them, still retain their original character.”

According to the 11 page section about the city of Tunis in Murray’s Guide, 130,000 Arabs live in the upper side of Tunis while 30,000 Christians and 20,000 Jews inhabit the lower parts. Yet the author describes the French theater and Roman history so extensively, and describes so little of the music, art and cuisine of the Arab population, that the reader gets the false notion they don’t live in the city at all. Either that, or as the quote shows, they are instead stuck in an eternal antiquity, selling knickknacks and relics at the “Native Bazaars.”

In a rare instance, the guide compliments Arab art at the “Salle de Musique” and the “Chambres des Femmes” of the “Musée Alaoui”: “These [rooms] are in themselves gems of art, being decorated in the most exquisite manner with nuksh haduia, or arabesque plaster work.” Yet his usage of French to name the museum and its rooms illustrates his reluctance to grant agency and ownership of the art to Arab culture. It is also impossible to tell whether the museum is originally a French or an Arab museum, but regardless, it is clear that he is only willing to compliment Arab work in a French context.

The plaster work in the museum is also the author’s only mention of Arab art. He instead devotes the grand majority of this section to guiding his readers to sites of ancient Roman and Punic history, particularly at the site where Carthage once stood. He writes about the ancient Basilica (now a Christian church that houses the bodies of martyrs), multiple Roman churches, cemeteries, and schools, and many museums housing relics from the Roman and Punic periods as well.

The approach of Murray’s Guide to local culture serves to confirm a point that Edward Saïd makes in Orientalism: “So far as the West was concerned during the nineteenth and twentieth centuries, an assumption had been made that the Orient and everything in it was, if not patently inferior to, then in need of corrective study by the West.”